Challenging metrology - How portable CMMs can work for you

When it comes to metrology, there are varied and highly sophisticated options available. As technology advances, so have levels of convenience and usability of measuring devices. The type of measuring tool used will depend on your particular environment and situation, and many measuring devices are designed for use in specific settings following set guidelines.

However, there are challenges to placing a typical CMM on a shop floor, hence, the development of portable measuring devices.

Although there have been some challenges when it comes to using portable CMMs, the technology is advancing and the trade-offs for using a portable solution over the traditional bridge-type are greatly reduced.

The portable coordinate measuring device has brought inspection right into the production line. Portable measurement is far from the comfort of the traditional climate-controlled metrology lab with their stable granite tables and qualified operators. It’s because not all measuring requires this level of technical control that portable options with the benefits of flexibility are being embraces, along with the fact that portable

CMMs are generally much less expensive than their stationary counterparts.

One of the most popular styles of portable CMMs is the articulated arm. This highly portable device maintains an overall accuracy that is surprisingly comparable to its classic CMM technology. According to Canadian Measurement-Metrology Inc., the arm-style portable measuring device is the number one choice for measurement in the modern manufacturing facility.

Because the arm can be taken to the part for inspection machine downtime and quality control bottlenecks can be greatly reduced.

According a FARO Technology white paper titled 3D Measurement Arm Technology: “arms are designed to adapt to most temperature conditions so they can work in a wide range of environments and are not confined to a temperature-controlled inspection room. The accuracy of arm CMMs exceeds a majority of the hand tools often used to do an inspector’s job.”

There are still several challenges that users of portable measuring devices do need to overcome when operating in production environments, and one of the biggest is vibration.

If the shop floor is inadequately insulated against vibrations, the vibrations can be transmitted to the mechanical measuring process used on arm devices. A portable solution designed to overcome this limitation is the optical portable CMM system.

“The limitations for the mechanical, portable CMMs are that they are very sensitive to vibrations. Due to this limitation, now we can see in the market more and more optical CMMs,” says Jean-Francois Larue, product director, Creaform.

One such device is the HandyProbe from Creaform. This optical system uses a wireless hand-held device for measuring instead of the fixed arm. It is also possible to put optical targets on the part, that way the part can be tracked if moved. Optical devices require a tracking unit within an operating space in order to function. Creaform’s tracker, the C-Track has dual-camera sensors, fitted with high quality optics and special lighting, enabling them to measure all reflectors within their operating space.

For Larue, there are few limitations to the optical technology, but one would be that you need to have a view on the part or tool that you are using to make the measurement.

When working in an environment where interior measurements are required, the optical devices are not ideal. “In the case of the HandyProbe, you have an optical probe and you need to see the optical probe at all times during the measurement. So that means that if you have, for example, a tube or cylinder, it’s not so easy to measure inside the tube.

“With a mechanical arm you can go directly inside the tube, with the optical system it’s a little more complicated,” said Larue.

It is important to explore portable CMM capabilities when used for specific applications.

The articulated arms equipped with laser trackers are highly used in laboratory conditions and shop/production floors. The optical CMMs have found a home in assembly lines and are used for dynamic measurements.

While the arm option has become a significant fixture in the metrology industry, the optical machines are fairly new but are being embraced in various industries.

“A lot of users right now are in … the automotive industry,” notes Larue, citing Volkswagen, BMW, and Audi in Germany, as well as Toyota, Honda, and Mazda in Japan. He also points to aeronautics applications including Bell Helicopter, Boeing, and Airbus. Right now in Germany, Creaform products are being used on the Golf vehicle production line.

The practical applications for portable CMMs are constantly evolving, much like the technology itself. The articulated arm is considered the breaking away point from traditional bridge-style coordinate measuring machines and climate-controlled room environments. As shop floors and production lines transition with new technologies, the need for portable CMMs will continue to grow. The advantages and challenges users face when using particular metrology devices can be overcome when choosing the right device for a specific application.

GAINS IN SPEED, CONSISTENCY AND ACCURACY 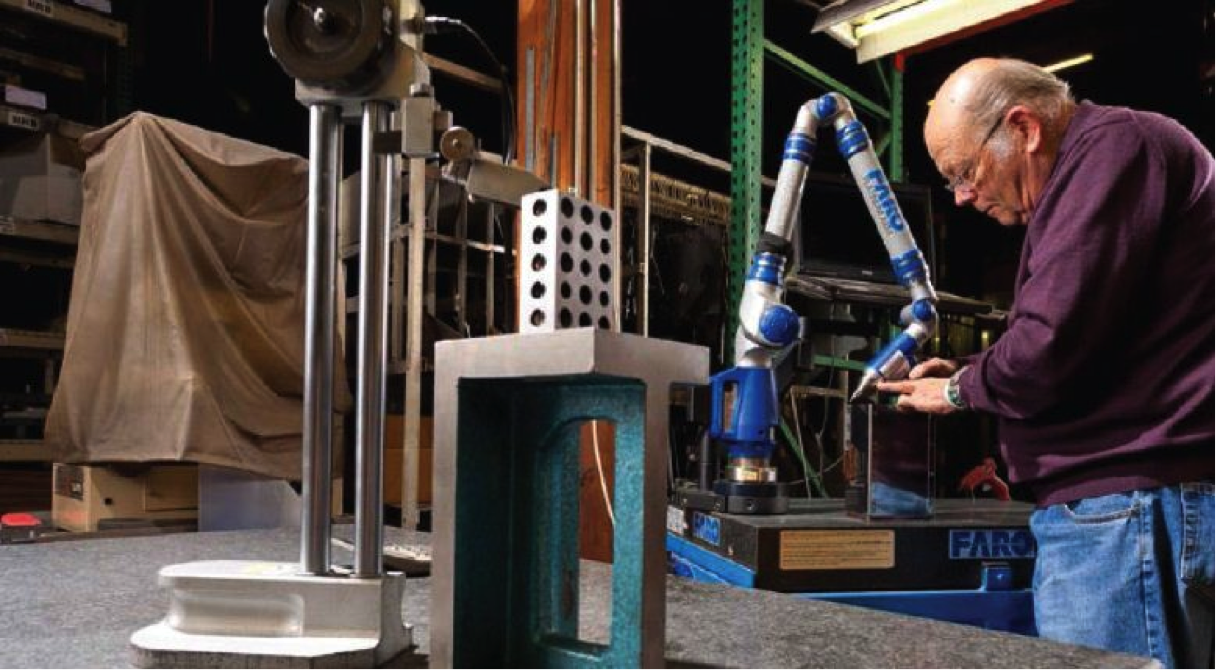 Buyken Metal Products of Kent, Washington is a respected manufacturer of quality metal parts products in the northwest.The company has a long history of investing in the latest equipment, technology, and training so it can stay at the forefront of all aspects of metal parts manufacturing.

Buyken was founded in 1939 and for over 70 years has been a leader in precision sheet metal forming, stamping, and fabrication. The metal products industry has changed over this long history to where lead times are getting shorter while customer demands are growing. Buyken’s competitive advantage comes from dissecting its processes to search for the best way to build parts. The company’s commitment to the highest standard of capital equipment allows it to respond to ever-changing customer needs and helps ensure Buyken’s position as an industry leader.

Buyken measures everything from electrical transmission parts that can be as long as 25 feet and have bolt patterns with tolerances of ± 0.032 inches to small, one-inch diameter washers with tolerances of 0.003 inches. These parts are in runs of one or two pieces up to two million pieces.

These measurement methods were slow and often required several set-ups for complex parts, especially for parts with compound angles or several bends. They required manual recording of measurement data and then determination of out-of-tolerance deviations. This took a lot of time and was subject to recording errors.

Buyken looked into optical measuring systems, but the z-axis limitations and the table size that would be required to overcome them made such a system untenable.

Buyken decided to purchase a 6-foot FaroArm with FARO’sCAM2 software. The FaroArm made it possible to complete measurements with one set-up and has dramatically improved efficiencies. Instead of taking parts to a surface plate, Buyken now takes the FaroArm directly to the part needing measurement. 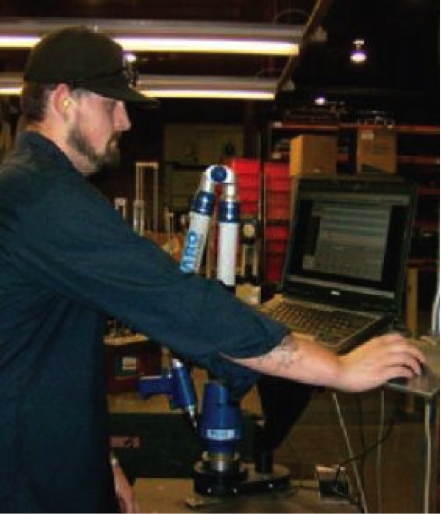 “It made our transition and implementation very easy.”

For Buyken, the flexibility of the entire system has been key. The company has found the CAM2 software to be especially intuitive.

“The report quickly generated by the system matched the mapped drawing with feature locations and dimensions,” said Osborne.

The time it takes Buyken to generate first article inspection or PPAP (Production Part Approval Process) reports has been reduced one to three hours per instance by implementing the new system. “Not only has FARO saved us time,” said Mr. Osborne, “but it has reduced the variations in measurement from day to day, part to part, and operator to operator.”

In addition to consistency, Buyken has even gained additional work because they implemented the new system. A customer came to them with a DoD part they wanted the company to manufacture. Buyken was awarded the contract because they had an arm with the capability to measure the 13-foot long part with a very tight tolerance. Other customers have also asked for support in reverse engineering their own parts that lack existing drawings or with performing measurements that are beyond their capabilities, but not those of Buyken.

“Our defined cost of quality, our scrap rate, and our on-time delivery percentage have all shown marked improvement since we acquired our FaroArm,“ says Osborne.

Metrologic Group released Version 12 of the X4 platform. With over 30 new major functionalities, Metrolog X4 and Silma X4 now offer more than a way to improve user experience and drive value across every…