It’s about 30 cms long, eight millimetres thick, smooth, soft, with a curly form. It’s completely insensitive to cold, heat, damp, dust or dryness. It can live for several decades - despite the fact that it spends its entire life in the dark. It’s a very special species, unknown even to biologists. It’s a foam gasket seal. 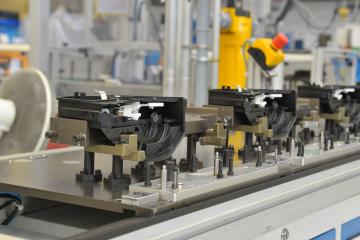 Unnoticed by the human eye, it curls itself up just 10 cms from the left or right upper arm of virtually every BMW driver or passenger - in the door lock of all vehicles bearing the blue and white emblem. Here, between the interior and exterior door panels, is the habitat of the foam gasket seal. And here it fulfils its one and only purpose in life: to seal the vehicle latch closing system hermetically against moisture and dirt from outside. This makes sure the lock will work anywhere in the world, and even under the harshest of conditions. In the Arctic Circle and the Gobi desert, in tropical climates and in the cold and wet German autumns.

Like more than 50 other automotive manufacturers, BMW favours Kiekert AG's technology for high quality locking systems. Based in Heiligenhaus near Dusseldorf, the global leader for the supply of automotive door lock systems operates in nine countries around the world, with a total of around 5,000 employees. Six of these locations are production centres, five are involved in R&D, and there are three sales & distribution centres.

With more than 1,200 patents, Kiekert AG is the uncontested leader of innovations in this challenging field of technology. Here at Kiekert AG, central locking and electromotive power servo locking were invented. This is also where engineers are hard at work developing various solutions to make driving even safer and more comfortable in the future. And it’s a place where the quality assurance processes offer very special guarantees. With foam gasket seals, only completely healthy specimens are released, up to 20,000 a day in the plant in Heiligenhaus alone. 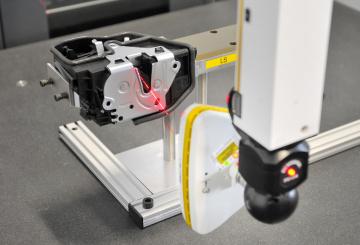 The challenge: quality to last for decades

The body of the caterpillar-like bead is made of a special, malleable dual-component foam which is applied to the shell of the lock by a robotic spray system, in a serpentine shape about as thick as a pencil. As a compressed sealing lip between the lock and the door panel, the foam gasket seal prevents any moisture from entering the lock system. Because door locks and rear compartment locks are not generally replaced or serviced during the life-cycle of the average car, the foam gasket seal has to function reliably for several decades. In order to do so, it has to be shaped with utmost precision. Because even the smallest deviation in the profile, surface outline or position, could cause acute long-term damage to the locking mechanism.

It’s hardly surprising therefore, that Kiekert has singled out the foam gasket seal as a part which most definitely has to pass a quality assurance inspection, and which is treated accordingly with great attention. Quite independently of the verification Kiekert demands for the quality of the part.

When production of the foam gasket seal began, Kiekert initially approached the issue, in agreement with the customer, via touchtrigger probing on CMMs (coordinate measurement machines). This solution was completely viable, and customers were certainly satisfied. But Kiekert’s highly critical quality assurance team was nonetheless sure there was room for optimisation.

Even using the lowest force of 0.2 Newtons, the contact probe’s tip made a slight indentation in the soft foam material. This deformation righted itself again naturally - but it caused a small amount of inaccuracy. The optimum probing angle with early triggering was ascertained following a long series of tests. This minimised the effect - but there were other aspects of contact (tactile) measurement which proved to be less than ideal.

The limits of tactile measurement

The most disadvantageous: the foam gasket seal is a complex 3D surface profile, so measuring one dimension only is not sufficient. Information is required regarding its height, cross-section, profile geometry and position. Ultimately, tactile measurements cannot portray all this, due to the limited points measured on a bead. To gain a complete overview using tactile measurement, the process would be extremely time-consuming. Not to mention the laborious evaluation of so many tactile inspection points, that are often presented in tabular numerical reports.

However, by cutting down on the number of inspection points, it would be difficult if not impossible to maintain the desired overview.

Time was a rare commodity in the Kiekert Quality Assurance department, for BMW door locks with attached foam gasket seals. More and more components were arriving in the central measurement room for sampling inspection and the limit had almost been reached - but fortunately there was also an exciting solution to hand. 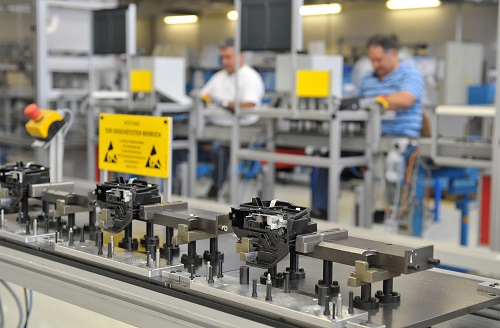 Kiekert had already gained intensive experience with single line scanners, particularly in the component qualification of so-called “prototype parts”. As soon as laser scanner technology came on to the market at the beginning of the millennium, the potential of this measuring technology was recognised in Heiligenhaus, and it was implemented step by step in the quality assurance process. Hence for some time, 3D laser scanners made by the measuring equipment manufacturer Nikon Metrology, have been used not only in the German production site in Heiligenhaus, but also in Kiekert’s largest plant in the Czech Republic as well as at the site in Mexico.

At all these locations, the enormous advantages offered by noncontact laser scanners are impressive:

With the introduction of the newest evolutionary phase in Nikon technology, the XC65Dx digital Cross Scanner, Kiekert has now drawn foam gasket seals into the crosshair of the laser.

The crosshair comparison hits the mark. With its three lasers positioned crosswise to each other, Nikon Metrology’s XC65Dx digital Cross Scanner is able to digitise not only surfaces, but also to focus on features such as pockets, holes, slots etc. This can also be applied to the complete, complex profile of the touch-sensitive foam gasket seal in Kiekert’s latch closing systems. Notably, this all done in a single scan, with the foam sealant passing through just once. Thanks to the fact that the laser lines come from three different angles, this also reduces the repositioning of the scanner during the scan. The field of vision covered by the three laser lines is 65 x 65 mm, whilst the precision level of the sensor is 12 μm.

Three scans in one pass equates to a huge saving in time. The XC65Dx Cross Scanner, which operates on a Nikon bridge coordinate measuring machine, takes comfortably under four minutes to measure the entire foam gasket seal. During this time the high-performance data processing generates a high-density 3D point cloud from a scanning speed of up to 75,000 laser points per second. Thanks to the comparison colour reports of the Nikon measurement software, the operator receives an evaluation of the test and deviation results which is meaningful even at first glance. Even those who have not received explicit metrological training only need to look at the colours to interpret the deviations. This is certainly an important aspect when measurements are not only taken in the measurement room (as with Kiekert) but also close to production or alongside production.

Additionally, specific characteristics from the 3D point cloud are extracted and statistically monitored to regulate the foaming process.  This way process trends are corrected before the agreed tolerances are exceeded.

Shorter measuring times, high precision, complete 3D view, simple to operate, fast analysis of results: These advantages alone are convincing arguments in favour of Nikon Metrology’s Cross Scanner technology for inspecting foam gasket seals. And the advantages don’t end there. Parts don’t have to be sprayed with matt spray in a time-consuming process to rule out unwanted reflectivity. The basis for this is the permanent, automatic point-to-point adjustment of laser source intensity of Nikon Metrology’s XC65Dx. It individually configures up to 75,000 points per second, thus guaranteeing a homogenous, complete point cloud picture without flare.

Changes in the testing process, i.e., for different lock types, are not a problem either. This is because the necessary scanner movements can be generated automatically offline, based on CAD data. Using Nikon Metrology’s Focus Scan software, inspection programs can be run directly as required, even by operators without advanced metrology programming skills.

Kiekert AG is also ahead of the game when it comes to passing new and successfully implemented technology on to its international locations. The foam gasket seals to be inspected are now not only drawn into the line of vision of cross laser scanners in Heiligenhaus, but also in the SPC measurement room in the company’s largest production site in Prelouc in the Czech Republic.

Suggestions for how to purchase a CMM, or any other measuring device

I got started in the metrology field in 1985, and yes I got in this business from the sales side of the equation. Like anyone else…