LaserGauge Automation is a robotic system for measuring vehicle gap/flush on a moving assembly line. It is cost-effective, fast, flexible, and delivers LaserGauge accurate measurements.

Utilizing Cross-Vector scanning technology LaserGauge Automation is claimed to provide more surface information around the edges of assembled panels than any other robotic laser profiler. This is particularly important for accurate gap and flush measurements.

The LaserGauge Automation system is flexible with measurement routines developed using the LGWorks software. Measurement locations for each vehicle are taught to the robot allowing system implementation to be completed in a matter of hours. 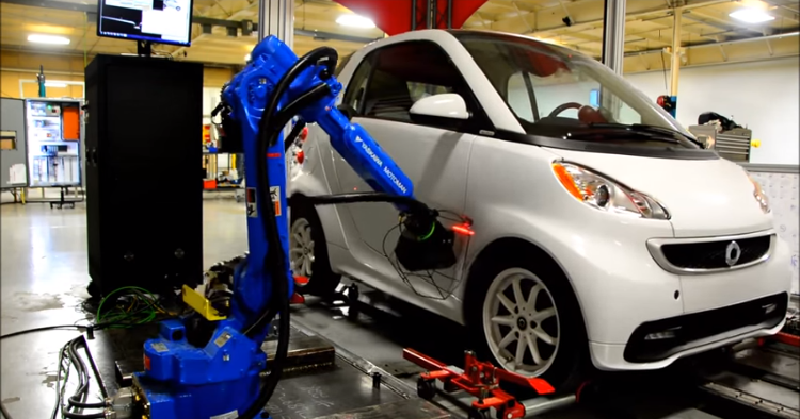 The Automation software can be used with any brand of robot, and can support 2, 4, or more robots at the same time and can be installed by a 3rd party integrator or OEM plant’s personnel.

The most innovative feature of the Automation system is the advanced Cross-Vector scanning sensor. Traditional laser profilers utilize a single laser stripe coupled with a single imager to capture surface scans; however a single view does not reveal surface points around the radius on the edge of the gap.

The Cross-Vector sensor utilizes multiple lasers and multiple views at crossing angles. This allows the sensor to see around edges of the radius to the vertical tangent and beyond resulting in a complete surface profile and very accurate gap measurements. The Cross-Vector sensor provides a higher density of points around the edges for increased accuracy and repeatability and no sensor movement or rolling of the sensor is necessary. The sensor is automatically positioned into non-contact alignment for each scanning location based on real-time feedback from the vehicle position and orientation detection systems.

The historical scanning problem is that the scan cannot be acquired if the laser cannot trace the surface feature. A red laser penetrates transparent or translucent surfaces – windshields, headlights, tail lights, etc., so features around these types of surfaces are difficult to measure. Origin Technologies has resolved this challenge by utilizing a blue laser coupled with the traditional red lasers. The LaserGauge Automation solution with HS763 sensor incorporates both blue lasers for translucent surfaces and red lasers for the solid body panel features.

Inspection routines are created and edited using the LGWorks software. Virtual Gauges are configured specifically for each measurement point and specification limits are defined for each returned value. Detailed graphics and on-screen messages indicate the location and progress of the robotic sensor from one measurement to the next. Complex calculations referencing measurement data can be processed in real-time and included in the data file. All scans and numerical data can also be saved and output to various formats, pushed directly into the plant’s data handling system.

Flexibility and ease of setup has been designed into the system. Using a standard Ethernet connection, the RS763 sensor can communicate to a PC, robot controller or PLC using the AnyBus X-Gateway, which allows the LaserGauge to communicate using any number of industrial networks such as Profibus, DeviceNet, Modbus DP, etc. The Automation software and the robot controller use two-way communications to control sequencing and operation. Development tools are available from Origin Technologies Corporation for third-party integrators or for the plant’s robot programmers to implement and support the system internally. Virtualization tools allow for the testing of the system before installation is complete. A special Teach application provides sensor position and orientation feedback during robot path teach for optimum positioning of the sensor.