Standards are important to Renishaw not only as an original equipment manufacturer but as a producer of metrology software. Renishaw’s support of both the DMIS and I++ standards has enabled them to create a fully featured I++ Server (UccServer) and Metrology software (Modus) that is fully based on internationally recognized standards

allowing full interoperability between client applications and servers. Renishaw’s latest technological advance, the REVO, required significant changes to the DMIS standard to incorporate grammar supporting 5 and 6 axis measurement devices. This is now part of the 5.2 revision of the DMIS standard. These new statements apply to both probing systems and robot arms.

Although major advances have been made in CMM probing technology over the last 3 decades, mechanical trigger probing (TP2), strain-gauge mechanisms (TP200), analog scanning technology (SP25/SP600) the persistent problem from a CMM programmers point of view has been the lack of infinite position control.

Typically, the CMM programmer has either had to work with fixed probing or an indexable head with limited position orientations. Fixed probing, although accurate, is not as flexible as indexable heads and often requires the use of cranked styli and expensive fixtures to maintain the part orientation so that the stylus has clear access to the feature being measured. Indexable heads which position in fixed increments, often do not align with the feature being measured.

So, a probing system that can operate at any orientation is going to be a valuable asset in the CMM programmer’s sensor arsenal and thus requires supporting by the DMIS standard.

These statements therefore provide control of 5-axis motion to navigate a sensor around a part and enable the 5-axis motion capability for part measurement which improves accuracy, for example, a sensor rotating around a circle or cylinder will produce more accurate measurements than when the CMM structure is moved, and is faster too!

This article focuses on the new functional DMIS statements; a client implementing these statements would be required to implement various tools to aid in the generation of the added capability.

An important aspect of 5 axis motion with respect to a CMM is the definition of the head position.  Two methods are available which can be considered as absolute or relative. 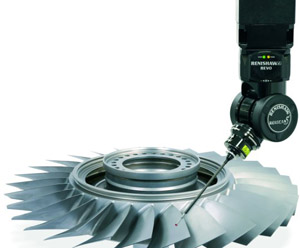 The absolute method (identified by the minor word HEADCS) describes the head position relative to the probe head reference system and supports probe heads with 2 or 3 axis capability.

The relative method(identified by the minor word PCS) uses Euler (pronounced oiler) angles to describe the rotation angles required to orient the head relative to the current PCS (part coordinate system). The Euler angles are defined as rotations using the ZYZ convention. For convenience, further methods are available using F(label) and FA(label)  and the VEC minor word. This allows users to orient the sensor using nominal or actual features or by using a vector definition. When using these methods the sensor will orient so that it points at the nominal or actual feature or the defined vector. The PCS method means that even if a part is mis-aligned to the CMM PCS the sensor can always be oriented to the part, thus ensuring clear access to features being measured.

The SNSLCT statement is used to select a sensor and optionally orient it to the desired location, only the sensor moves, there is no CMM motion. SNSLCT/SA(6mmTool),HEADCS,20,5 will select the head and position it to A=5, B=20. SNSLCT/SA(6mmTool),PCS,90,45,135 selects and rotates to Z=90,Y=45, Z=135 relative to current PCS, additionally you can position the head using SNSLCT/SA(6mmTool),F(Plane1) or VEC,0,0,1.

The GOTO statement is used to position the CMM to a target relative to the current PCS, and optionally orient the head, this statement will typically produce 5-axis linear tip motion. GOTO/CART,0,0,5,HEADCS,20,5, moves the CMM to X=0, Y=0, Z=5 at the same time rotating to A:5, B=20. Again the PCS,z1,y1,z2 or F(label), FA(label) and VEC,i,j,k methods can also be used.

The PTMEAS statement is used to cause the CMM to take single touch measurements.

The modifications to PTMEAS allow the CMM to move to the approach position and take a CMM touch, a head touch or a 5-axis touch.
A head touch is a ‘flick’ action, while a 5 axis touch moves all axes to ensure the touch is taken at the correct location, optionally, the HEADCS or PCS minor words can be used to orient the head prior to taking the touch.

For example, PTMEAS/CART,100,250,250,0,0,1,HEADTOUCH moves the CMM from it’s current position to the approach location and takes a measurement by rotating the head, replacing HEADTOUCH with ALLAXES causes a 5 motion during the touch measurement.
Using HEADCS or PCS the user can orient the head prior to the measurement, for example, PTMEAS/CART,100,250,250,0,0,1,HEADCS,-90,45 moves the CMM from it’s current position and orients the head to A=45.0, B=-90 during the move, finishing at the approach distance from the target. The CMM then measures the point.

The PATH/CURVE and PATH/LINE statements (introduced in DMIS 4.0 to support the introduction of analog sensors) has been extended to include support for 5-axis motion with the PDATA minor word now allowing the minor words HEADCS and PCS to indicate the head orientation required with each path data point.

A new statement PATH/SURFACE has been introduced to allow support for sweep scanning. In this instance, the probe is guided along a curve and sweeps from side to side while collecting measurement data. The underlying surface can be planar or curved, the sweep parameters being expressed as width and height. 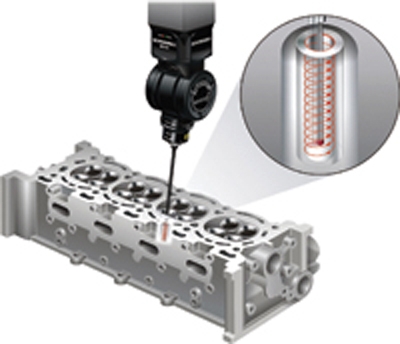 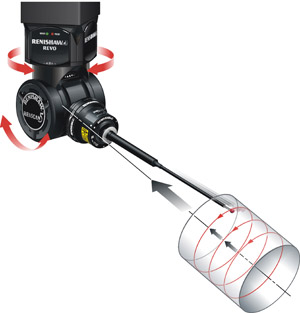 Improvements to the Path Measurement statement

When PAMEAS was initially published in DMIS 4.0 paths could be joined together by reading consecutive lines of PAMEAS until a GOTO or some other command was encountered. This was found to be ambiguous. As a result, the PAMEAS statement has been improved so that now a single PAMEAS statement can include multiple paths. To scan the surface around a rectangular shape we could use 8 paths (4 lines and 4 arcs), for example:

In this instance, the sensor would perform an approach move to the start of the Line1 path and commence scanning, remaining in contact with the surface until the Arc4 path and then retract from the surface.

To scan a cylinder with three circular scans the PAMEAS would be issued as:

At the end of each scan the sensor would retract from the surface and move to the approach position for the next circular scan.
Using the DISTANCE and SCNVEL minor words we can create scans that collect touch data in varying densities and velocities, e.g, PAMEAS/DISTANCE,.1,SCNVEL,10,MMPS,P(Line1),0,0,1.

This example shows how to use these minor words to collect data for a blade cross-section scan. 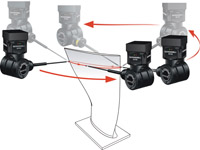 To scan a feature and pass over obstructions collecting no data, we would use the NODATA minor word, PAMEAS/P(Line1),0,0,1,NODATA,P(Line2),P(Line3) would cause the CMM to perform a scan where the middle path is off the surface and not collecting any data.
Control of sensor settings

The DMSC is pleased to introduce these new statements and states that they represent a major breakthrough in CMM programming, providing users and vendors with new and exciting functionality which will lead to more efficient programming and faster measurement cycles

Keith Morton is an Application Engineer with Renishaw Inc, manufacturer of probing systems. Keith spent the early part of his career with Rolls Royce in the UK, joining LK in 1977 when CMM’s were in their infancy. Since then he has taken a keen interest in the development of CMM software, especially the advent of CAD based systems. Keith has been a member of the DMSC for more than 10 years, has helped pioneer several new concepts and actively promotes the use of the DMIS standard. The author can be contacted at This email address is being protected from spambots. You need JavaScript enabled to view it..