Determining the Controlled Component for a Geometric Tolerance

A major advantage of the geometric tolerancing system is the ability to clearly define exactly what is to be controlled.  But determining exactly what geometric entity a feature control frame applies to can involve several different pieces of information.

Geometric Characteristics
The geometric characteristic is determined by the symbol in the first compartment of the feature control frame (FCF). 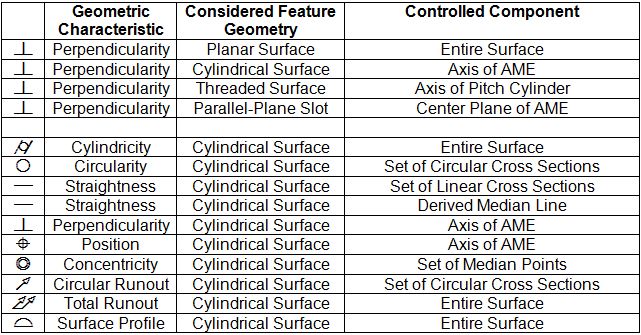 Modifiers
Modifiers in the second compartment of the FCF can make the geometric characteristic apply to a different controlled component.  Here are some examples:

Notations
Annotations under the FCF can also specify modifications to the controlled component, as shown in the following examples:

Every geometric tolerance controls a certain component of a feature, and this component depends on the specific combination of the considered feature and the information in the feature control frame.  A controlled component can be the entire surface of the feature, sets of cross sections, or one of several other types of derived feature components.

To achieve maximum accuracy, inspection for a feature must be planned with the required controlled component(s) in mind.  CMM inspection must be done in such a way that the extremities of the correct feature component are captured from the measured points.  This involves both point collection strategy and algorithm selection.

In Part 1 showed examined basic dimensions from a standards and quality assurance perspective.  For conformance assessment, there is no requirement to report measured values that correspond to basic dimensions.