Determining the Constraints on a Tolerance Zone

In previous articles, we saw that all geometric tolerance specifications control a particular component of the considered feature and define a tolerance zone.

Certain “hollow” tolerance zone shapes (annular, tubular) have a controlled wall thickness and also have a size or “magnitude” aspect:

• For some characteristics (e.g. Circularity, Cylindricity, Circular Runout, Total Runout), the magnitude of the zone is unconstrained

• These characteristics do not control the size of the feature

• For other characteristics (e.g. Line Profile, Surface Profile), the magnitude of the zone is fixed

Most geometric tolerance specifications reference datum features, which in turn define datums. The datums are used to apply “external” constraints to the tolerance zone (orientation and location). Different geometric characteristics constrain the tolerance

zones to the datums in different ways:

• For orientation characteristics, the tolerance zone’s orientation is constrained to the datums but its location is unconstrained. This means that the zone can freely translate away from its basic location to adjust to the actual location of the feature.

• The tolerance zones for form characteristics are never constrained to datums. The zones can freely rotate and translate to adjust to the actual orientation and location of the feature.

• Circular Runout and Total Runout tolerance zones are constrained only to the datum axis. This special constraint condition is not relevant in most runout applications, and only comes into play when a planar datum feature is referenced as primary.

The following table provides examples of the constraints that are placed on the tolerance zone, for several different geometric characteristics that are applied to a cylindrical considered feature: 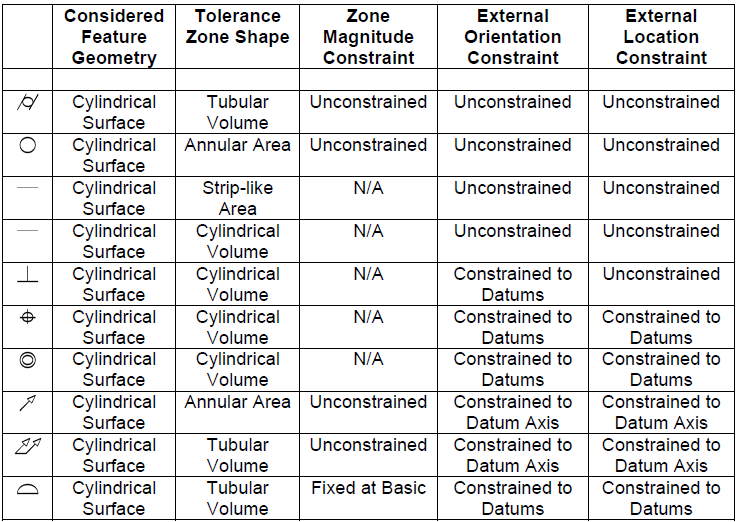 As can be seen in the above table, different geometric characteristics can define the same tolerance zone shape but apply different constraints to the zone. For example, Cylindricity, Total Runout, and Surface Profile all result in the same tubular tolerance zone when applied to a cylindrical surface. The distinction between each of these geometric controls lies in how the zone’s magnitude and relationship to datums are constrained.

Determining the Controlled Component for a Geometric Tolerance

A major advantage of the geometric tolerancing system is the ability to clearly define exactly what is to be controlled.  But determining exactly what geometric entity a feature control frame applies…