Part 1 of the article showed how size tolerances in ASME Y14.5 define actual local size limits and a surface boundary.  This combination of characteristics directly controls the feature’s mating envelope and indirectly controls form errors such as ovality.  We also saw how the default Least Squares cylinder calculation in most CMM software doesn’t verify either the surface boundary or the actual local sizes, and thus can often miss significant form error.  This article will examine the details of how form tolerances are defined in ASME Y14.5, and to what degree these are indirectly controlled by size tolerances.

Size Controls Form – But to What Degree?

One of the core principles of the ASME Y14.5 Dimensioning and Tolerancing standard is that size tolerances also control form.  For a cylindrical feature of size, the form characteristics circularity, cylindricity, and straightness are controlled without an explicit form tolerance being specified.  But how does this happen, and to what degree are these form characteristics controlled?

To derive the extent of the indirect form control, we must examine extreme cases in which the feature uses up all of the tolerance allowed by the surface boundary and local size limits.

The feature is produced with the maximum ovality error allowed by the size tolerance of 100 +/- 10.  The actual local sizes range from the LMC limit of 90 to the MMC limit of 110, and the feature just fits into the surface boundary of diameter 110: 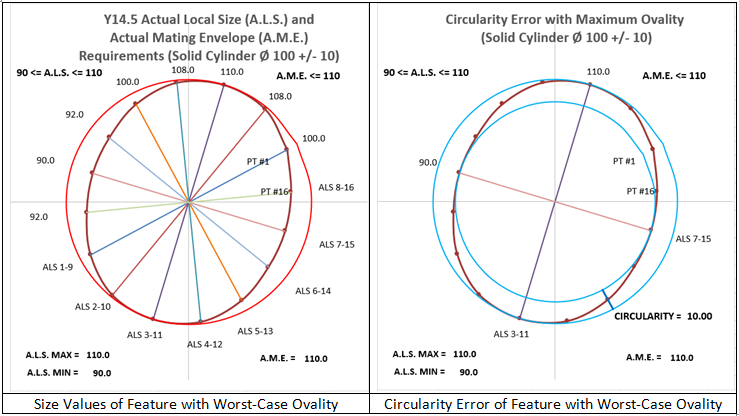 This time the feature is produced with a 3-lobed form error, to the extreme allowed by the size tolerance of 100 +/- 10.  The actual local sizes are all at the LMC limit of 90, and are displaced such that the feature just fits into the surface boundary of diameter 110: 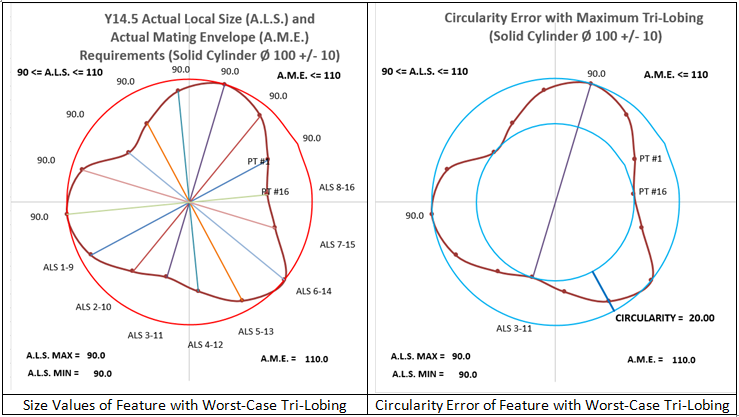 This results in a larger circularity error than the ovality case.  The feature fits between concentric circles of diameter 110 and 70.  The circularity error is the radial distance between the circles, which in this case is 20.  This is 100% of the total size range of 20.

Form is Controlled to the Same Tolerance as Size

The trilobe case is an example of an extreme case that results in the largest possible circularity error.  Other extreme cases exist in which the bending or waviness of the cylindrical surface causes equivalent magnitude of circularity error, but none are worse. The conclusion is that size tolerances with the ASME Y14.5 default rules allow form error that is no greater than the allowable size range.  So all of the applicable form characteristics for a cylindrical feature (circularity, cylindricity, straightness) are indirectly controlled by the size tolerance to a value equivalent to the allowable size range.

When the default rules of the ASME Y14.5 standard are applied, size tolerances control form to a degree equal to the allowable size range.  So a diameter tolerance of +/- 10 on a cylindrical feature will control the form characteristics of circularity, cylindricity, and straightness to be no worse than a value of 20.

Actual Value Definitions – ASME Y14.5.1M-1994 Standard
In the last article we saw that tolerance zones are defined in the Y14.5M-1994 standard for Dimensioning and Tolerancing, but actual values are…